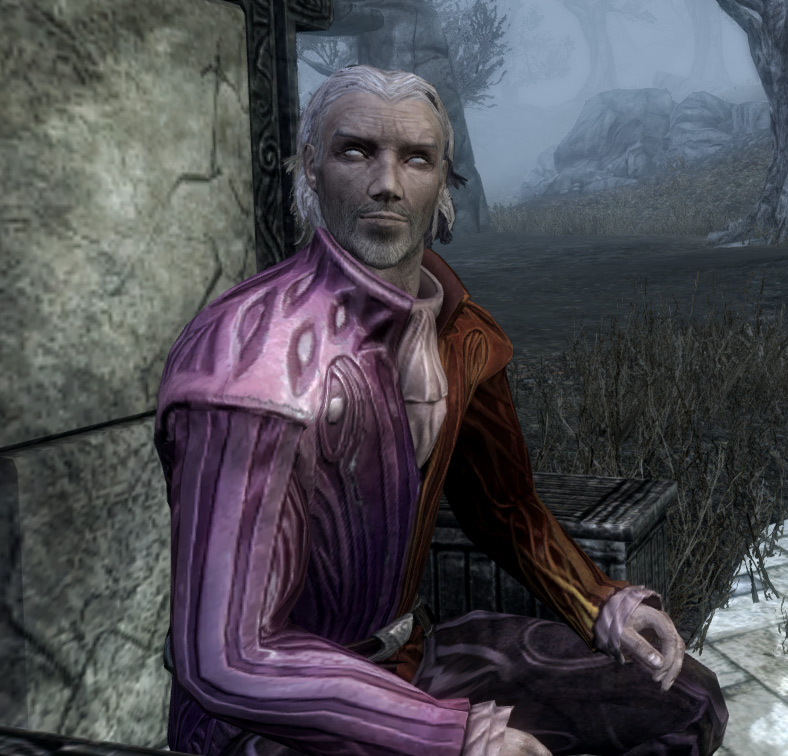 As I enter the mind of the mad, bad, and above all late emperor Pelagius Septim III, a familiar voice greets me:

“Yes, yes, go, leave me to my ceaseless responsibilities and burdens.” The man talking is sitting at a dinner table. As he finishes, he vanishes in a purple mist.

“How rude! Cannot be bothered to… Anyway, so what’s the message?”, the daedric God of Madness Sheogorath exclaims at me. He’s standing on the other side of the diner table, dressed in some sort of jester’s outfit.

“Hi,” I say, “That was that guy from the general goods store in Whiterun… Belethor, right?”

“WERE YOO NOW?!”, Sheogorath responds now with a nasty Scottish inflection, “By whom?… Eh, sorry what? No no, that was Pelagius the Mad, emperor of…”

“It was the same guy playing Belethor!”, I interject “And come to think of it, the guy doing the cranky dark elf at the corner club in Whiteheld. And you’re the same guy playing the ghost of Lucien LaChance, only you’re putting on a Scottish accent but I suppose that’s because you’re ‘mad’, right?”

I smile knowingly at him, allowing the inside joke of “how better to portray a madman than putting on a Scottish accent?” to remain unsaid. We both know that some comic conventions are cliché but a guy’s gotta make a living, right?

“Uhm yeah, can we get back to the plot? I have these lines to deliver, you know?”

“Actually that guy, the one that just left? He’s also doing Mallus Maccius and a number of other characters but I only know that becuase i checked imdb.” I say, adding apologetically: “I haven’t gone to Riften yet. But you can totally tell it’s him from the voice in the YouTube videos I’ve seen! And I gotta ask you: Why does he do every character in that James Woods impression? I mean the first time it was kinda cute, but EVERY GODDAMN character? Elves, nords, dogs… You name it, it sounds like James Woods. If I were Woods, I would consider sueing…”

“Excuse me, hello? I am playing a god of madness here. I am supposed to be the one doing the rambling…”, he vainly interjects.

It’s too late, because I am warming to my theme. Skyrim famously allows you more freedom than most games that has gone before it and right now I’m seizing that freedom by the throat. The jarls think they’re the only ones who can give speeches? I’ll show them.

“But what I really want to  know is who thought that using Scandinavian and Central European voice actors would make for greater ‘realism’ or immersion or whatever? Wait, don’t answer that, because it takes an American to think that modern Europeans speaking English sound like they’re coming out a Viking fantasy world. Newsflash, Bethesda: When a Nord opens his mouth what I hear is Ace of Base talking to MTV in 1990. And that’s when they actually use real Swedes instead of Poles, Czechs, Germans and what have you. What the hell kind of realism is that?! And why oh why is Faerengar Dutch? The Dutch have no place in a Viking fantasy, goddammit, it’s supposed to be Skyrim for the Nords, remember?!”

“Listen, mister, I am just a voice actor and I’m not proud of the Scottish thing, okay, so please don’t mention it again. And you have to admit that the Europeans are an improvement on the old Hollywood conventions of using Americans to impersonate you guys, right?”

I stand and think for a moment. He’s got a point: The Ameri-German Nazis, the Ameri-French aristos, the Ameri-Russian commies… It wasn’t pretty, that’s for sure.

“No,” I say, “I am not sure it’s an improvement. Because that’s what we’re used to hearing. To a European, the American version of the accent is the exotic one. That’s the one that allows for immersion because it doesn’t exist anywhere outside of the entertainment industry. You can’t create ‘real’ fantasy accents, only ones that work better than others. When an American actor is doing a Swedish accent, however poorly, I know I am in Fantasy Land and nothing breaks that experience. I don’t wan’t to start singing The Sign in my head just because some guard warned me about Craigshield Cavern.”

“Alright then, well maybe I can go back to my Scottish impersonation of a mad Daedric god then, if you please?” Sheogorath smiles a tight little smile at me. He’s got a job to do, and however poorly he’s doing it, I should let him get on with it.