Grow Home is a game for four year olds. So my only excuse for enjoying it so much is that while it is meant to be played by four year olds, they are clearly meant to be playing it through the convenient medium/controller of an at-hand adult, as the controls require far more precision than the kiddies possess themselves.

The game was released for linux about a year ago but as with so many Steam sale purchases I only found the time to sit down with it over the holidays [Editor’s note: Written, if not actually published, Xmas 2016].

Grow Home follows B.U.D., a small child-like robot that is dropped onto a small planet in order to explore. As part of this exploration he is to to grow a huge beanstalk-like plant, using it’s growth to reacher higher levels, eventually reaching all the way up to spaceship he arrived in. The taskmaster is the ever encouraging M.O.M. robot who worries about him getting dirty and bitches about the mess when he comes apart after plummeting a kilometer onto hard rock. There you go kids, that’s moms for you.

You grow the star plant by guiding it’s read-headed offshoots into floating, pulsing reservoirs of green goo, which fuels the plant’s explosive growth into the sky. I know I’m not the only one who’s thought that this whole thing feels weirdly phallic. Mechanically speaking, the challenge of keeping the writhing shoot on course to the goal is exactly like what I imagine riding a rodeo bull would be like if the bulls were more horny than angry and the rider’s job was to steer it towards a willing cow. After I had left the game and came back for another session, though, the guiding-of-the-shoots seemed more like a metaphor for our use of finite resources as the pumping out of green goo leaves the former reservoirs as dead rocks. Suffice to say that it’s probably meant as neither the former nor the latter. Still, if growing a huge star plant up towards M.O.M. doesn’t ring any oedipal bells for you, I guess nothing will.

Leaving all that aside, it’s not hard to pin down the appeal of this apparent kid’s game for adults, though. It has the peace and tranquility of a Proteus-like world, right down to the pastel-coloured island with sunsets, sunrises, short starry nights, and the lack of any kind of enemies or monsters (make it through a night and you get the jokey ‘What? No zombies?’ achievement).

You navigate the world of Grow Home by moving B.U.D. and this is wherein the challenge lies. B.U.D. moves with all the grace and ease of a drunk crack baby. This turns simple movement into a Newtonian physics puzzle: Once you set him moving in a direction you have to apply force in the opposite direction to get him stop as he tumbles more than walks. Seeing as he’s often surrounded by sheer drops of several hundreds of meters this provides the game with some… interesting moments. To make up for this deficiency his Schwarzenegger-like arms allow him to grab and climb without ever tiring. You control each hand separately and switching between moving the two is what propels him upwards as he climbs the star plant and the rocks on plateaus you encounter on your journey upwards. This control scheme requires mastery but as you progress you gradually loose that Drunk Crack Baby feeling and move on to the level of Nimble Monkey Child, running and skipping across branches thousands of meters in the air. Or something. 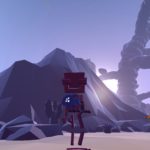 And so the journey begins. So far to travel. Cue lens flare. 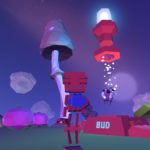 Believe it or not but this was only done in the name of science. What possible other explanation could there be for floating a befuddled sheep in an anti-gravity field? 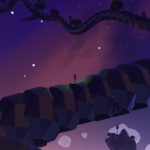 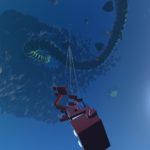 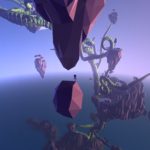 A giant, floating exclamation point expresses my feelings quite nicely about this view. 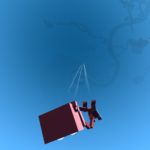 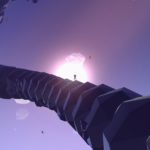 Ok, so I might be overdoing the lens flares. Blame J.J. 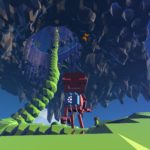 I want to stress that there’s nothing Freudian about this game. At. All. 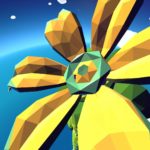 Made it, Ma! Top of the World! Also top of a giant flower.

But I think the most compelling thing about Grow Home is the sheer wonder it’s scenes inspire. At first I didn’t think much of it apart from the fact that the by now somewhat familiar simplistic polygon look similar to that of The Long Dark (think stylized PS2-era graphics) was competently done and pleasing. However as you move upwards and unlock camera zoom, the sheer scale of this simple little game hits you. Despite it’s extremely humble requirements (it smoothly at 1080p on a Broadwell i3) the game easily renders a space many hundreds of meters in all directions including up and down. I can’t stress enough just how breathtaking those views are. It makes me want to experience it in VR badly and makes me never want to experience it in VR knowing that the vertigo would knock me out for some considerable time.

The effect on me of those views is equally dualistic. I get a strong Le Petit Prince vibe off of that tiny little robot against the backdrop of endless space. And, justified or not, my main Le Petit Prince-take away was that loneliness can be just as infinite as space. But maybe that’s just because I watched that horrible puppet version where the planets are minuscule and space is pitch black each Easter when I was growing up (’cause you see, kids, back then we only had channel o’ TV and the internet was not a thing…) Another take is simply, that when you look down, you see how far you have come, how far you have progressed. Take your pick.