I finally caught the Spelunky bug after the HD version hit the Steam sale this past Christmas. Since then Steam informs me, I’ve sunk 36 hours into the game. I don’t wanna do the percentage math on that one.

I have also read up on what peope are saying about the game (in case you didn’t know, they like it) They also makes references to previous games. It feels like we’re establishing a lineage so that it becomes clear that we’re not just talking about a good game but a game that has entered a pantheon alongside The Classics. Which is fair and just. Spelunky feels classic in the same sense that Donkey Kong is. It’s fairly easy to get started but the underlying complexity means that you could spend years getting better and stil not achieving completely mastery. Note the tense of the verb could in that sentence; I’m not about to dedicate my life to a game. Just a day and a half. And whatever is required to get to the end. And then some, probably.

To get your bearings on the nature of Spelunky two coordinates tend to be established: a) it’s a platformer and b) it’s a rogue-like. It’s a hard, unforgiving platformer so comparisons are often drawn to other hard platformers, like Super Meat Boy and lots of Nintendo titles that I know nothing of (I grew up in the 80s not the 90s). And the the lack of lives and saves along with the randomly generated levels puts it firmly in the roguelike family. 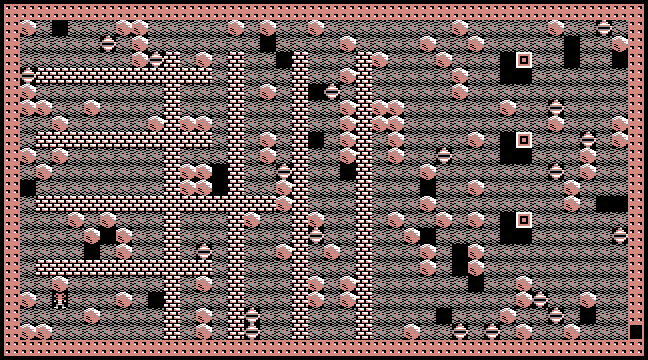 If you couldn’t tell by the name of this blog, I am a fan of the C64 (amongst others) title Boulder Dash. I’ve spent countless days, nevermind a day and a half, guiding Rockford through the caves, and still think that getting it working in a C64 emulator is the best entertainment that 0$ can buy (apologies to any publishers who do not recognise the concept of abandonware). Boulder Dash features Rockford, an… ahem spelunker, who plunges through 2D cave after 2D cave in search of treasure, navigating and manipulating  treacherous terrain while avoiding monsters and the ticking clock. All levels were handcrafted but many contained elements that would develop organically and unpredictably – slime would grow, rocks would resist being pushed – so that memorizing moves aren’t an option. The cave layout was a grid of square blocks in which each character or terrain block took up an equal amount of space. Enemies would move through empty blocks and rocks and jewels would fall down when blocks underneath them were cleared. The terrain was manipulated by clearing dirt, pushing rocks or causing explosions to clear walls and rocks in your path.  Your goal was to collect treasure and make it to the exit before the timer ran out. You started with four 1 HP lives and there was no saving your progress. You can probably see where I’m going with this.

Boulder Dash is the most obvious reference point for Spelunky whether it is conscious or unknowing, acknowledged or ignored. Apart from the thematic similarities, there is a secret ingredient in Spelunky that I think the abovelisted references miss. Forethought. Planning. The How-am-I-gonna-crack-this puzzle factor. Whether the levels are randomly generated or designed, the keyword is treacherous. While some gifted individuals…

… may conquer it on sheer instinct – or more likely so much practice that it looks like instinct – mere mortals ought to  walk and think every now and again when a tricky situation arises. There’s an element of tactics – do I stop and kill enemies one by one, do I spend a bomb on them or do I simply try to outrun them – and a puzzle element – I have to get past this knot of traps, bats, monkeys, frogs and what-have-you, but how – to Spelunky that is very reminiscent of BoulderDash.

What makes for this similarity is a similarity in how the games are designed. Both game feature lots and lots of rather simple game world mechanics that when combined makes for a bewildering array of possibilities. In Spelunky you not only need to know that a mantrap will swallow you, regardless of your angle of approach, you also need to know that it will swallow any other living creature. And that while blue frogs and bats stay eaten, orange frogs will explode inside the mantrap and shopkeepers will shoot themselves free. If you don’t kill the mantrap while the shopkeeper is inside. And so on with hundreds of specific interaction mechanics between spelunker, monsters, ressources and terrain. As an example from Boulder Dash, consider slime or “amoeba” (“Consider the slime” is not quite Matthew 6:26 but it will do for our purposes) You were warned of it’s presence in a level by a gurgling sound. You would have to know that it would grow over time potentially cutting you off from the exit. That it would react to being walled off by turning into jewels but that it would turn into rocks if left unchecked. You would find out that the enemies would explode on contact with it and that the blocks affected by the explosion would be considered ‘walled off’ and so might cause the amoeba to harden into jewels. Each on it’s own is a simple game mechanic but in combination with others like it it made for complex and ever changing gameplay with no two levels alike.

The upshot is this: Spelunky not only looks like the child of Boulder Dash in appearance, theme and gameplay but in it’s adherence to the idea that these levels are not just levels as in straight-up platformers. They are little worlds with their own internal and extremely dangerous dynamics which you just happen to passing through. You have to pay attention and observe those dynamics and their interplay and plan your advance accordingly all the while moving, dodging, manipulating terrain and collecting treasure. And you need to do this because if you don’t, you’re dead. You need to engage deeply with the game and the game gives you a reason to engage with it.

If you focus on whether or not a game is ‘roguelike’ or not you might think that these games have nothing in common. One features designed levels, the other’s are randomized. One has one life (with four HP), the other has four lives (with one HP). I think this sort of categorization is just lazy journalism, an easy slotting into place. The Binding of Isaac has also been branded roguelike and so is a common touch stone when discussing the roguelike nature of Spelunky. But the levels of Isaac have nothing of the microcosmic complexity that is essential to Spelunky for me.

This is turning into something of a nerdy, obsessive whine-rant about terms and definitions…

… so apologies all round. My point is that I hope developers and publishers learn more from Spelunky than “Make a roguelike platformer!” In essence what they could have learned from Boulder Dash thirty odd years ago: An action puzzle game needs an interesting, complex, living breathing world just as much as an open world sandbox RPG or a grand strategy game in order to captivate your imagination and keep you coming back for more, day after day after day…