This was to have been an obituary. “Here lies Lorrie Olson who died of thirst after three days because she couldn’t find a container to carry snow for meltwater in.”

Turns out you don’t need a container for snow. Seeing as it’s everywhere, The Long Dark simply treats it a ressource you always have in infinte quantities. Lucky for Lorrie I figured this out just in time, having settled her in front of a roaring let’s-all-die-of-thirst-in-oh-say-five-minutes fire.

The Long Dark just launched for Linux/SteamOS and I just spent two hours surviving three days. And what three days they have been. Remember that time when we ate raw venison and got food poisoning because I was still figuring out the controls? What larks. And then when we ran out of water and were completely dehydrated and found a box of salty crackers? Man, Fate has a nasty sense of humour. Fortunately it also had stoved some carbonated beverages away in a cupboard for me or I wouldn’t have been able to swallow those crackers. Quite literally.

The game is still in early access and so you don’t get story mode or lots of maps to roam around in. What you get is a sandbox full of snow and trees and wolves and a pat on the back. Supposedly you’re a plane crash survivor but until story mode gets implemented all that matters is that it is (yet another) survival game about scavenging and crafting. It is single-player (only?) though, so as the tag line says you won’t be fighting sadists or zombies only “the cold, and all the threats Mother Nature can muster” Well, that and the controls that at times seem inspired by 80s era adventure games. I have a lantern, I have lantern fuel but never the twain shall meet. It feels just as frustrating as searching for the right verb. Pour? Refill? Oh just put the thing in the thing, whywontya! I thought at first that maybe there was bad blood between the two but a new canister of fuel is equally resistant to hand over it’s contents to the lantern. Fine, I can make my way in the dark by grope and by match.

I really shouldn’t beat on The Long Dark for it’s interface though. Despite the absence of a tutorial I have managed to learn how to master most of my initial challenges in the scope of only two hours. I no longer leave a trail of energy bars and raw meat after me after I figured out that once in the inventory, ‘Y’ means drop. I come across a can of tomato soup on the frozen lake and think ‘Oh yeah. Day 1’. I have a ‘survival menu’ with inventory and health meters I can pop into for detailed info. The HUD consists of some very subtle icons hinting at state changes and endurance and that’s it. Most of the time the screen is ‘clean’. You do not get a map, neither mini nor otherwise. I think The Long Dark deserves high praise for an interface that is minimalist yet functional. Partly because it increases immersion partly because it leaves all the more room on the screen for the scenery. Which is stunning. And the best thing is that the art style means that it can run on pretty much anything, including 1080p on my i3 with integrated Intel HD 5500 graphics HTPC. The landscape looks bright and beautiful and feels cold and uncaring.

Allow me to dwell on that scenery for a bit. As I’m writing this everything in gameland is about Fallout 4. I have seen a few videos and screenshots and they’re an obvious improvement over Fallout 3 and New Vegas. But it’s still the wasteland and as Quintin Smith very accurately observed in his review of the latter for RPS:

… the wasteland is potentially quite a boring setting for the player to be set free in. I mean, you think wasteland, you think deserts, charred ruins and grumpy survivors wearing faded, drab clothes.

I don’t get Fallout and I definitely don’t get the fascination with the wasteland. My imagination comes up short when I try to see adventure or mystery in that dirty grey-beige… waste. Given the choice why oh why would you choose that as a setting for your fantasy? Why, when you have something like this: 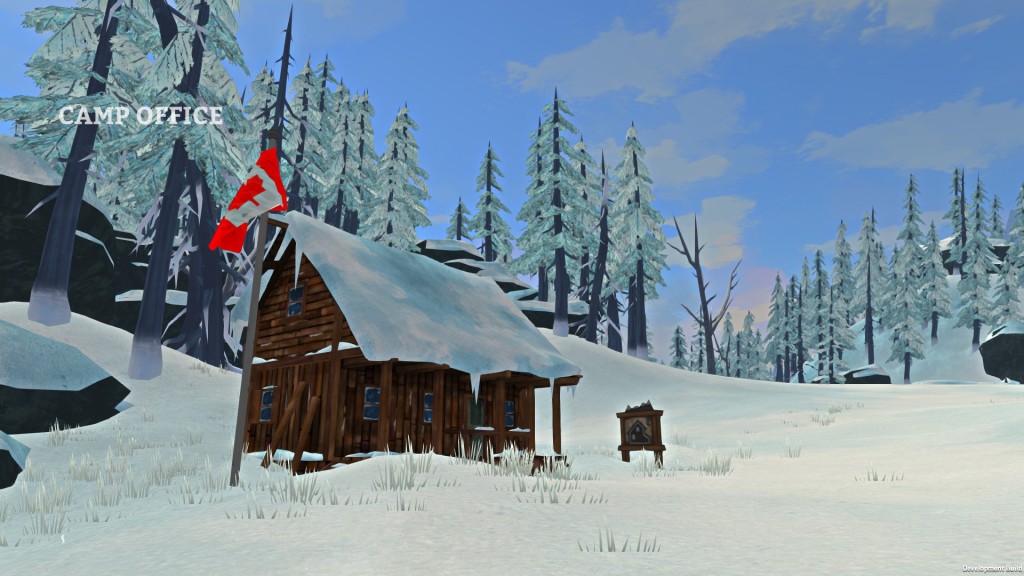 Another day at the office. At least, I hope I get another day.

I can positively taste the adventure lying behind that snowcovered crest while I see nothing but drudgery in traversing the scenery of Bethesdas post-apocalyptic post-fun simulator. I am afraid that it’s simply a question of taste.

Looking at screenshots before I bought I thought that The Long Dark might make a pleasant walking simulator but with a bit of an edge. You know, like dying at the end of your walk. This turned out not to be the case. Though there is joy to be had just discovering the area and the landscapes surrounding Mystery Lake – as the first accessible map is known – ‘pleasant’ doesn’t cover it. Remeber the soundscape of Proteus? The soothing music, the cute little tinkling noises the chickens made, the way you didn’t hear your own footsteps because you didn’t walk as much as float? This is the exact opposite. The wind is constantly howling even indoors, your breath is laboured and when music sporadically makes an appearance it’s usually to signal danger. And it works. Turn up your heater and get a blanket because you’re gonna feel that cold wind no matter how toasty your living room is.

Since I don’t like being harangued by teenage boys I have mostly avoided the multiplayer-focused surival genre so far. So I can’t really compare The Long Dark to the standards of the genre. Playing on beginner difficulty – where wolves scamper when you tell them to – I felt no dread, just that slight discomfort at the howling wind and the sense of doom. Regardless of difficulty I think the experience is a muted one in comparison to the genre. And I mean that in a good way. The art and color palette are plesant, matte pastels and your main character only rarely mutters to her- og himself. It’s a quiet, subdued, solitary experience and Hinterlands, the developer, doesn’t try to dial it up in any way. Apart from that blasted wind, the most oppresive thing about the game is your own knowledge of the precariousness of your situation. And the occasional frozen corpse hinting at the precariousness of your situation. 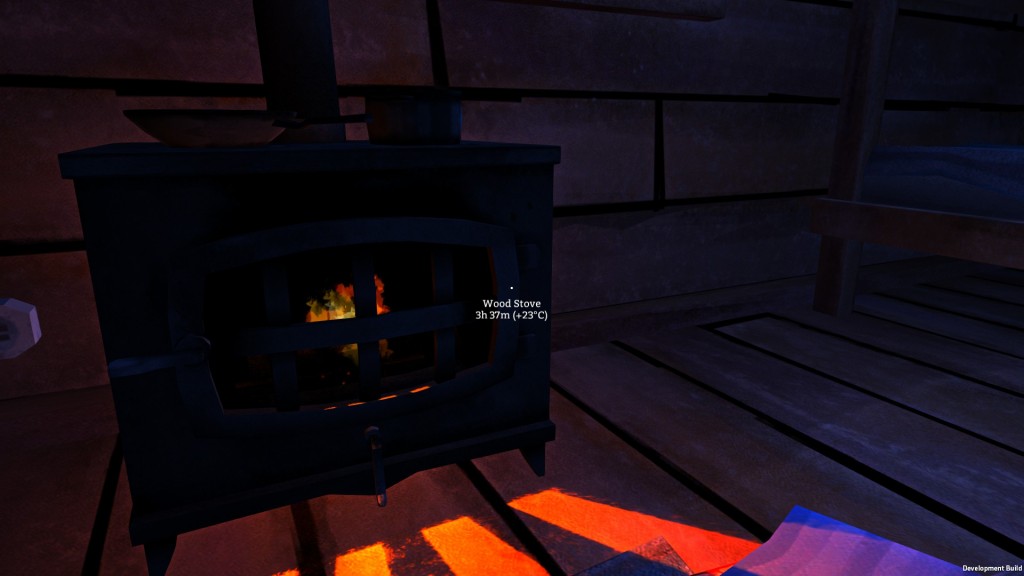 This is the coziest The Long Dark gets. It’s not quite cozy enough to make me forget about my imminent death.

As mentioned previously I don’t have much survival horror reference. The games that The Long Dark puts me in mind of are from a somewhat different universe. Fans of Skyrim will no doubt be familiar with mods like ‘Frostfall’ and ‘Wet and Cold’ that turn Skyrim into a miserabilist’s wet dream (Pun intended. Sorry). The Long Dark feels quite a lot like that especially given the northern setting and aesthetic. Also in the sense that one of the main challenges is to pay careful attention to your surroundings and react appropriately.

Quite a lot farther away in terms of tone and mechanics I am continaully reminded of Psychonauts, and I don’t think it’s just cause I have an obsession with that game. The art style feels a lot like that of Psychonauts only with all the warmth and glow of that title bled out of it. The other thing that prompts this is the setting. Mystery Lake is the abandoned home of a camp, just like Whispering Rock from Psychonauts, with cabins and piers and fishing huts. And probably a giant hulking lungfish too, somewhere under all that ice. It doesn’t tell you much about the game except that I really like that art style. 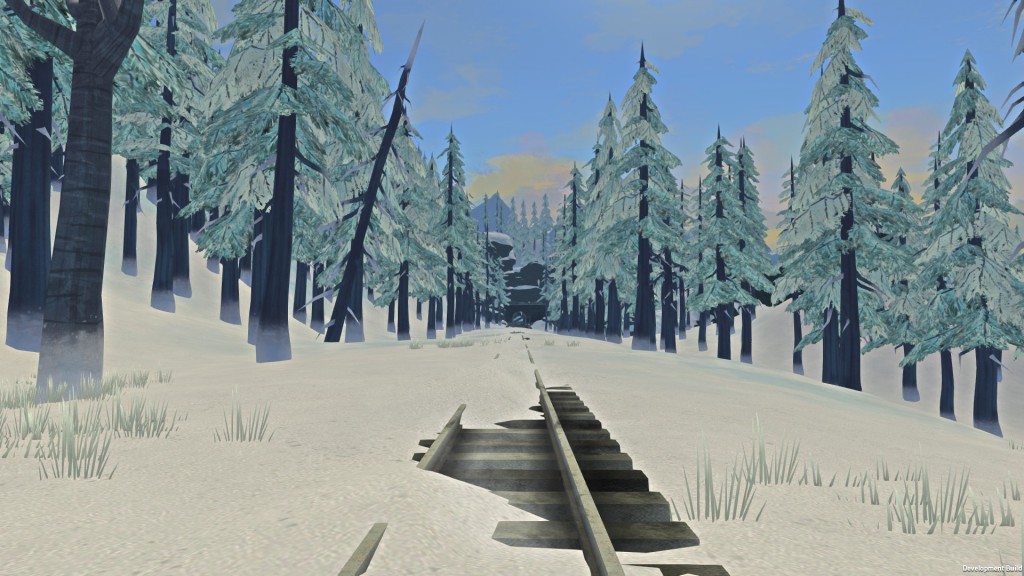 The train tracks end at a tunnel that is filled with rocks and wrecked train cars, blocking your further progress. How convenient.

I haven’t accomplished much survival-wise in my three days. I have really just been living from hand to mouth and figuring out the basics. I am left wondering, though, if there is enough gameplay to hold my interest or if it will descend into grinding and crafting the same ressources over and over. Your ability to interact with the surroundings is severely limited. You can’t jump, you can’t reach anything and you can’t move objects if you can’t pick them up. Maybe I haven’t figured out how yet, maybe it’s just because of EA. As it is it feels rather limited. As an example your only allowable interaction with a comfy chair is to smash it to bits for firewood. Mental and physical comforts such as sitting don’t enter into the equation. And despite my limited playtime I have already encountered the borders of the sandbox such as the rockfilled train tunnel which makes me wonder just how long before I have seen it all.

It seems to me that Minecraftbuts either go for more and more complex crafting, allowing you to build increasingly intricate machinery and tools or they simply allow you to get comfortable, living an almost Sims style life in the middle of the wilderness. Of course Minecraft itself allows for both playstyles including a third option, namely exploration. What makes exploration in Minecraft somewhat unsatisfying is of course that it’s all procedurally generated and so very samey-samey. And so, apart from discovering new biomes and finding horses and other things they don’t have where you spawn from, there isn’t much point.

I think that this third option is where The Long Dark has the most potential. We don’t have much of a story yet – some geomagnetic shift is the cause of your plane crash and civlization’s end – but when we do, I’ll want to uncover it. You should build up your ressources and your level of sophistication in order to explore the area beyond your daily reach from base camp and discover stuff relevant to the story. Or you could allow me to build an aircraft out of scrap metal and take off, that will be fine too.

Those are my initial impressions and future hopes for The Long Dark. Which is actually pretty bright. As long as you can sleep away 12 of every 24 hours.